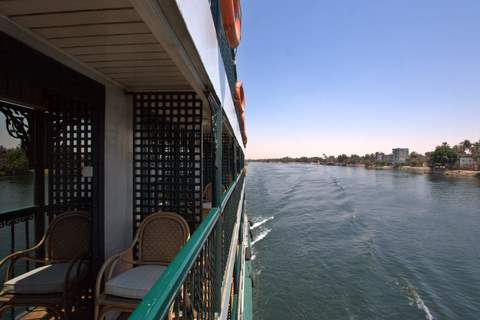 A rare bit of relaxation on our cruise.  This is shot from our balcony one afternoon as we leisurely cruised from Edfu north to Luxor.

One of the shop keepers near the Valley of the Kings.

Our third and fourth days on the Nile were not much different from the first two.  Every day was exhausting.  Each morning we’d wake up as late as possible, rush down for breakfast, and then go on another tour of amazing Ancient Egyptian sights.  Since it was the off-season it was easy to get around the sights and see everything without waiting in lines, but the extreme heat of the desert and being exposed to the sun for 6 – 8 hours would take its toll each day.  Appetites were low, but water consumption was way higher than normal.  It was nearly impossible to drink enough.

These homes were along the Nile between Edfu and Luxor.

Our fearless leader and guide telling us about the Temple of Karnak.  If I remember correctly it was Ramses II that like to carve his name and heiroglyphics so deep into the stone.  The Temple of Karnak was enormous.

We would return to the boat around 4PM and take a short nap before getting cleaned up for dinner.  The cruise had a nice mix of buffet lunches and ala carte dinners.  We really enjoyed the discrete service we had on the ship.  The crew and staff were always there when you needed them, but were never seen when you wanted some privacy.  The Nile is full of cruisers and we felt very fortunate choosing the Oberoi cruise as some of the other ships looked quite run down.

Laura taking a break and finding some shade.

Steve doing the same thing.  The small wood box with brass fixtures is my pinhole camera.  I haven’t developed the film yet, but when I do I’ll post them here.

Laura in the early morning at the Valley of the Kings.  Getting there as the sun was rising didn’t sound fun the night before, but it was a great idea for beating the heat. 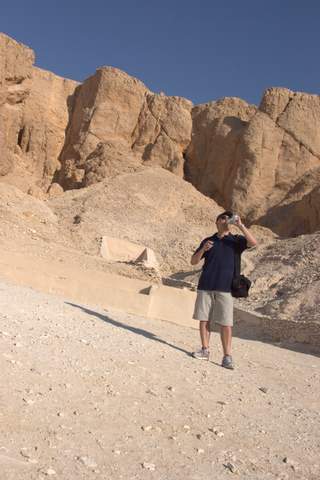 The Valley of the Kings and Queens was interesting in that there was nothing spectacular about any of the tombs here.  After all of the previous Pharaos had their tombs robbed by tomb robbers the idea of being buried in a nondescript place became very popular.  There are 62 tombs in the Valley of the Kings alone.

A beam of light streaming into the temple. 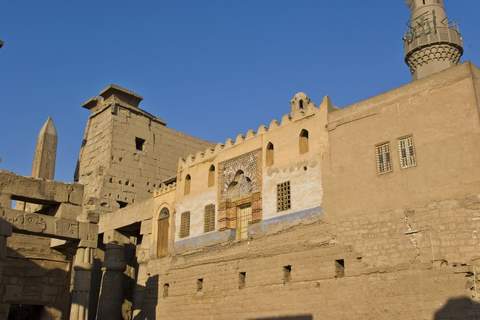 And finally this interesting sight in the Temple of Luxor.  This mosque was originally built on what was thought as ordinary level land.  You can see the door to the mosque about 25 feet in the air.  Afterward it was discovered that the mosque was actually built on top of the Temple of Luxor.  As excavation began they started to realize the extent of the temple and shut the mosque down to finish working on the excavation.

One of the most remarkable things that we saw were the colors inside of a tomb in the Valley of the Queens.  It looks like it was recently painted, but this color and paint dates back thousands of years.

In all we had seen 13 different monuments, temples and mosques in our first seven days in Egypt.  We were getting exhausted, but things would soon change as we headed over to the Hurghada for the next 7 days.

Next stop: the Red Sea.

One thought on “14 Days in Egypt: Part IV The Nile”